The building of the Nidd Valley Railway, which opened in 1862, had a pronounced effect on the 1861 census returns for Hampsthwaite and Menwith-with-Darley.

513 people were listed including 32 railway workers.  The enumerator was ROBERT PULLAN who neglected to enter the address of each household.  He is listed as a Druggist, aged 55.  His wife was Grace, aged 49.  They were both from DARLEY.

650 were listed including 21 railway workers.  The enumerator was JOSEPH METCALFE who resided at Low Lane.  Aged 38, Farmer of 17 acres and born in Darley.  His wife Sarah, aged 43, was born in PATELEY BRIDGE.

The total persons listed in 1861 in the five districts of Hampsthwaite, Menwith-with-Darley, Birstwith, Felliscliffe and Thornthwaite & Padside was 2,422.  The total in 1881 was 2,093.  A reduction of 329 or 15.72%.  More analysis would be required to discover those occupations which suffered the greatest losses but it is interesting to note that the largest reductions in population occurred in those two districts, Hampsthwaite and Menwith-with-Darley, where a large number of railway workers were listed.  They were described as lodgers or boarders with occupations such as stone masons, plate-layers, excavators, pile drivers or simply railway labourer.  Their places of birth, not surprisingly, covered a wide area of the North of England and only one or two appeared to be of Irish extraction.  Their average age was 35 so it could be assumed that they were already experienced in the work required of them.  Only one or two local men appear to have been take on by the railway.

There are one or two interesting entries.  At a dwelling in Green Lane, Menwith-with-Darley in 1861, the Head was listed as a Pauper aged 63.  Her daughter aged 32 and Grandson, I year, lived with her; as did four masons who must have been railway workers as they were boarders and not local men.  What a wonderful boost these men must have given to a pauper’s income.

In the 1881 census for Hampsthwaite there is only one railway worker listed and he was described a plate-layer but in the 1881 census for Menwith-with-Darley we have the Railway station Master installed in the railway station with his wife, daughter and his son, aged 16, who must have taken great pride I announcing to the Enumerator that he was a Locomotive Engine Fitter’s Apprentice.  The railway had also provided two station cottages.  Once occupied by a plate-layer, his housekeeper and scholar son; the other also occupied by a plate-layer, his wife and two children.

Perhaps the most unusual entry was that for Mr Peter Barker of Hampsthwaite, age 52, blind from 2 years of age, occupation – carpenter!!  Perhaps he ‘saw’ more than he admitted to?

Construction of the Nidd Valley Railway began in September 1860 and the line opened on 1st May 1862.  It left the former Leeds and Thirsk route at Ripley junction, north  of Harrogate and followed the valley for eleven miles up to the town of Pateley Bridge.  The line was single track, with passing places at Killinghall (named Ripley Valley from 1875), Birstwith and Dacre.  Additional stations were provided at Darley in 1864 and Hampsthwaite in 1866.  Hampsthwaite station closed in 1950 and the last scheduled passenger train ran on 31st March 1950.  Occasional excursions and goods traffic continued until 30th October 1964.

Birstwith and Darley stations have been demolished but the buildings at Pateley Bridge and Dacre survive.

I wonder if any of our readers traveled on the Nidd Valley line – perhaps for a day in Pateley Bridge or the opposite journey to visit Harrogate?  I traveled on the line in 1935 but all I can remember is the train passing through a lot of woodland and watching a trail of smoke as it passed my window.

We can’t blame Dr Beeching for closing this beautiful line as it closed long before his axe fell on the rest of the country.  It just ran out of passengers when we all took to the roads but wouldn’t it be wonderful if we could once again see that trail of smoke drifting over the fields and through threes or hear its whistle as it approaches the villages in the valley.   (Dream on) 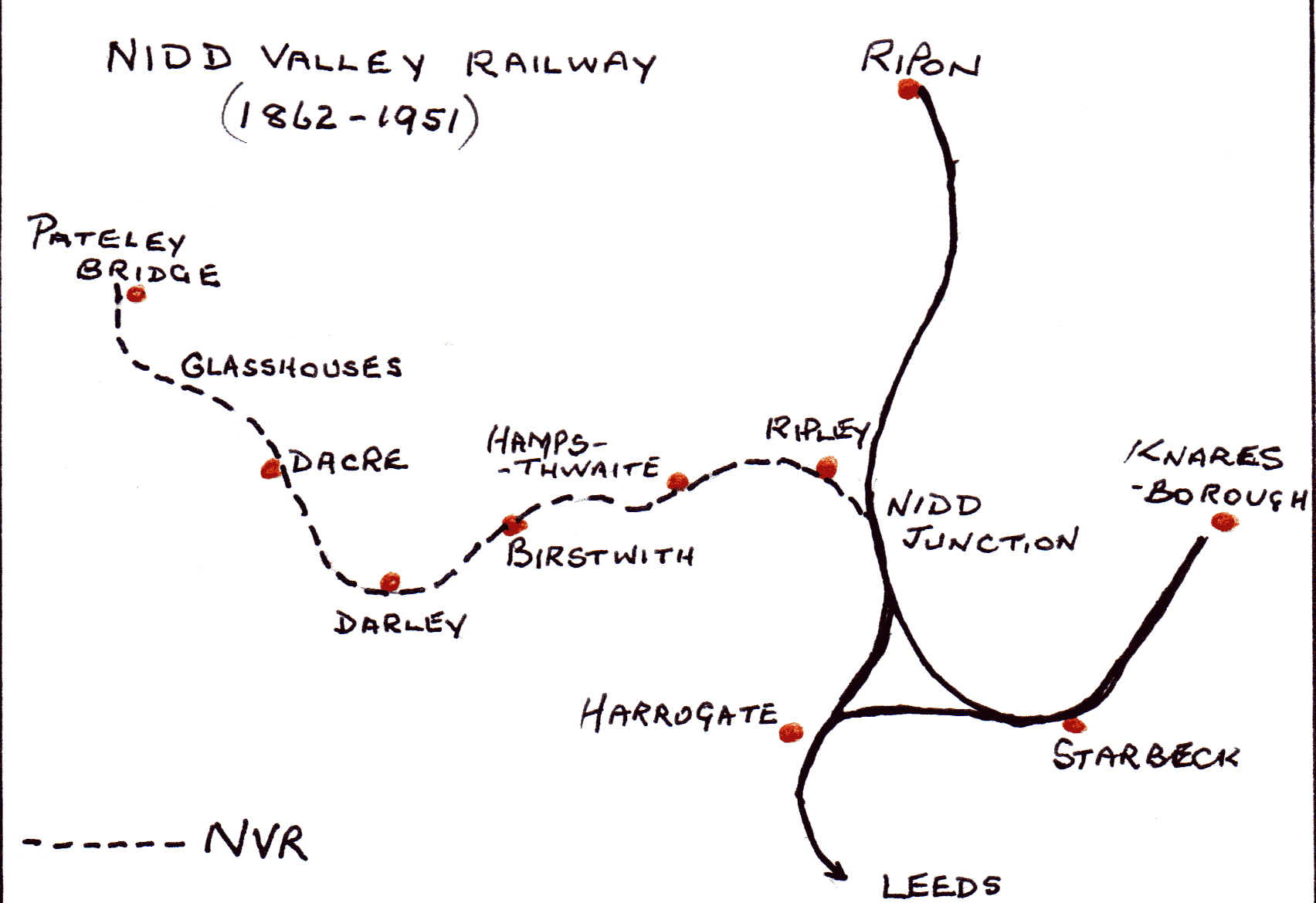 The Nidd Valley Railway and How it Affected the Census Returns of 1861 and 1881 was last modified: February 7th, 2018 by Web Master
This entry was posted in Our Blog. Bookmark the permalink.